We neither can count all,
to whom mischief has happened,
nor can we honor only one of them
with dignity.
Giacomo Leopardi
(1798-1837),
Italian poet

On the morning of September 11, 2001, a bright and sunny morning, at 8:46, the 2 towers of The World Trade Center were towering majestically over the Manhattan skyline, as they did since 1971 and 1973 respectively. Moments later a sequence of events was started, sequence that would turn these 2 towers, that brought a lot of us closer to Heaven than we will ever be, into the Gates of Hell.

On the morning of September 11, 2001, at about 8:47, I was walking down the stairs from the second floor of the Port Authority Tech Center and I noticed a plume of smoke rising from Tower One. The news on TV did not break yet. We all rushed outside the Tech Center where we had a clear view of the towers. Minutes later the TV news broke and it was told that there was an air disaster as a plane of some sort crashed into Tower One. Our duties switched instantly to provide uninterrupted radio communications. But we could see the second plane crash into Two World Trade Center, a sight that none of us will ever forget... a site that later would be compounded by seeing the 2 towers collapse to the ground, leaving nothing but an enormous pile of debris, pieces of the well known exterior of the towers resembling shards of glass atop a pile of trash.

And lets not forget the thousands trapped in this disaster, many of them who rushed in to help others, whose bodies just lay there, covered in dust, debris, crushed by steel and burned by fire. Among these were 75 Port Authority employees. I particularly remember seeing one woman on TV holding a picture of her husband. He did not work in World Trade Center, but he rushed in to help others... this is how he was. She knew that her husband did not make it out of there alive, but still stayed there holding his picture in the hope that some stranger will come up to her and tell her: "I remember him. He helped me get out."

The image of the World Trade Center will always remain part of the Manhattan skyline for me, regardless of the fact that every day when I go to work approaching Jersey City on the Pulaski Skyway, I can only see a hole where the Twin Towers were, a hole that is connected to the hole left deep inside of me. And every time I wipe a tear. 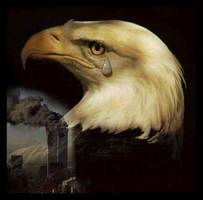